We've Been Nominated for a Webby Award

“Nominees like Bittersweet Monthly are setting the standard for innovation and creativity on the Internet,” said David-Michel Davies, Executive Director of The Webby Awards. “It is an incredible achievement to be selected among the best from the 13,000 entries we received this year.” 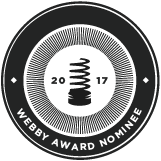 Of Loves and Laws

A Conversation with Project Hope Alliance

An Untold Story of Survival in a Village Controlled by Guerillas